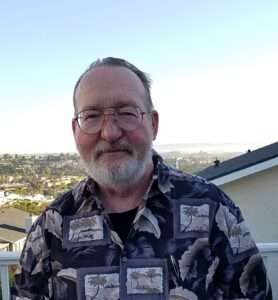 A native of rural Kern County, California (Bakersfield), Chris attended the local UU Fellowship in his youth. Taking a break from college, he was sucked into the Army by the draft, forced to leave California for Ft Bliss, Texas, became a Vietnamese Linguist/Voice Intercept Operator, and served one tour in Vietnam performing signals intelligence work.

Eventually released from the Army and married to the former Peggy Hackett whom he’d met in El Paso, Texas, he completed his undergraduate degree and matriculated into Texas Tech University School of Medicine. Needing financial support, Chris sold his soul (or, at least, rented it) to the US Air Force trading ‘money today’ for ‘four years work’ in the future.  To his surprise, he liked practicing medicine in the USAF, hanging around airplanes, and living overseas. He retired in 2001, living in Germany while Peggy taught Special Ed for the Dept of Defense Dependent Schools system on Ramstein AB.

Along the way, Chris has been a member of seven UU congregations and served on the boards of three of them as board member, treasurer, or president.  He is also a past president of the European Unitarian Universalist organization.

He and Peggy moved to Arroyo Grande in 2014. At UUSLO he is currently on the Endowment Committee and served as a greeter and soundboard technician when we met physically together.