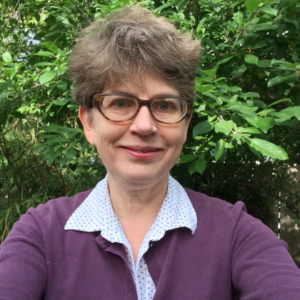 Katy Ayer has been attending UU congregations (with interruptions) since she was a girl in Davis, CA in the 1970s. Katy has been a member of our congregation since the year 2000. She was previously an active member of the southern California UU congregations in Whittier and Fullerton.  Up until she was thirty, Katy was convinced that truth was only attainable through art, and this principle led her to obtain a Ph.D. in German literature. She subsequently changed her career path and is now a small-town CPA in Arroyo Grande.

Katy and her husband Steve Beadle have two grown sons.  Both boys have fond memories of Religious Education activities in this congregation.  Katy remains active in the RE program, and has served on the Endowment Committee and the Board, as well as assisting with financial and capital campaign endeavors.