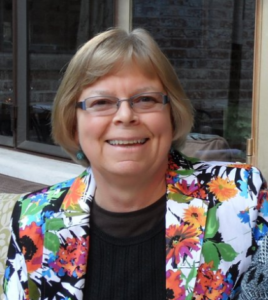 Kerry was born in Eugene, Oregon and raised across the river in Springfield as an avid Oregon Duck.  Her family was Baptist and her parents were active church leaders.  She earned a BA in Spanish and Psychology and a MA in Public Affairs at her beloved U of O. The majority of her working life was spent in county government administration, with budget and finance being a focus in each of the positions she held in three different California counties.  Her interests include reading, more reading, and photography.

Kerry discovered the UU in 1994 when she enrolled son Patrick at Starr King Parent Child Workshop in Santa Barbara. That wonderful preschool was housed at the Unitarian Society of Santa Barbara. She and husband Kent became first time UUs here in 1998 after being pledging friends. She has served on the RE Committee, assisted in RE for nine years, was on the Board of Trustees, serving as Board President for two years, and has been on the Treasury Team since 2006. She welcomes this opportunity to serve the Board and the congregation as Treasurer. She has been the Treasurer since 2016.