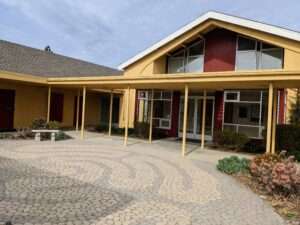 Our congregation began in the early 1950’s with a small group that met in private homes.  The impetus behind the initial founding was to offer a forum for open and respectful discussion of important issues and to provide an opportunity for people of color to speak publicly which was otherwise disallowed in our county in the early 1950’s.

In 1961, the American Unitarian Association–established in 1925–merged with the Universalist Church of America–established in 1866–to become the Unitarian Universalist Association, and the Fellowship became a member of this new Association.  As members sought to live out their values within society, they focused on such issues as desegregation, disarmament, the war in Viet Nam, and fair housing throughout the 1960’s.

The Fellowship moved many times throughout its history, but in each location sought to live out its mission of open and inclusive religious community and principled action in the wider world.  We bought our current property in the Fall of 2011, so 2012 has been an eventful year moving into our new location in March and welcoming our new minister, The Rev. Rod Richards, in August.

Members are presently involved with issues of racism, sustainability and environmental consciousness, homelessness, immigration, LGBT rights, interfaith work for justice, and a host of other areas of concern.  There are also a wide variety of interests in spiritual and ethical exploration on an individual and communal level.

We look forward to continuing the work we’ve been doing and to finding new ways of building and strengthening religious community while making a positive difference in the life of the wider community.  Our Mission Statement speaks to where we have been; where we are; and where we are going:

Unitarian Universalists San Luis Obispo is a diverse religious community providing a nurturing environment where individuals are encouraged in their search for truth and supported in acting on their beliefs.  We welcome all who would share in our open, challenging journey.

Copyright UUSLO. 2023 - All Rights Reserved
Back To Top
Search